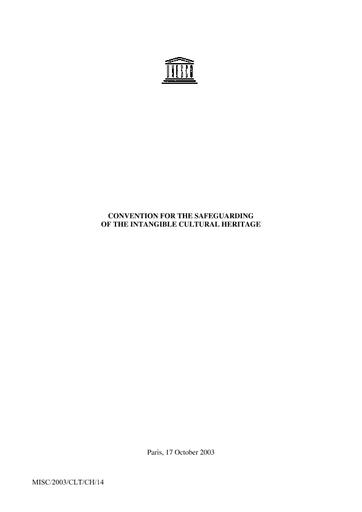 Cultural heritage is a cultural asset that is passed on from one generation to another. These assets can be tangible or intangible. However, not all of the heritages from past generations are considered to be heritage.

Intangible cultural heritage (ICH) is a term used to describe the diversity of living traditions, knowledge and practices, which reflect the culture, history and identity of people and communities. The intangible cultural heritage includes a wide variety of manifestations, such as songs, dances, rituals, traditions and performances, as well as social and associated objects. It is usually expressed through oral traditions, performing arts and rituals.

ICH is an important element of maintaining cultural diversity in an increasingly globalized society. It serves to provide a sense of identity, contribute to social cohesion, and promote sustainable development. ICH also provides a basis for intercultural dialogue, thus helping to foster mutual respect for different ways of life.

There is a wide range of artefacts considered to be part of cultural heritage. They can be broadly categorized into three types: material, social and intangible. These categories are not mutually exclusive.

Material artefacts are generally considered to be the tangible objects that have been created and shaped by time and effort. Social and intangible forms of cultural heritage can change with time and are not always easily accessible. Intangible artefacts include adages, sayings, social practices and generally applicable experience.

Traditionally, museums operate with a material concept of artefacts, and exhibit media products as a special case of heritage artefacts in the museological context. While digitization can generate digital versions of media objects, it does not provide the semantics of documents or provide a direct connection to their original form. This can create challenges for museums when it comes to bridging the gap between audiences of today and historical media material.

Cultural heritage refers to a variety of things including monuments, artifacts, archaeological sites and museums. It can also include the natural environment and underwater heritage.

The concept of cultural heritage has grown from being limited to material objects to include all evidence of human creativity. This includes artistic, scientific, aesthetic and symbolic significance. Immaterial elements such as rituals, performing arts, and knowledge transmitted from generation to generation are also considered part of the same sphere.

One of the first things to consider when it comes to protection of cultural property is documentation. The documentation is key to the long term conservation of your heritage asset. Some examples of this include legal documentation, notes, photographs, and technical documentation.

Cultural heritage museums provide visitors with a window into the past. These institutions showcase the different cultures and histories of a country, and can be a great source of information. They also provide an excellent way to learn about the cultures of other nations.

Museums often have an extensive collection of artifacts. These may include archaeological finds from prehistoric times, as well as modern jades and textiles. Many of these museums also have a special focus on a specific area of culture, such as Asian art or historical craft-working.

One of the main advantages of a museum is that it provides a venue for artists to showcase their work. Museums can also contribute to the economy through the sale of art and other items. Some museums are free to visit, while others charge a small fee. A discount is generally given to students, seniors, and groups.

Throughout history, mass atrocities have targeted people and culture. This connection has been reflected in human rights law. Today, efforts are being made to protect cultural heritage.

A comprehensive approach to protecting cultural heritage in the context of genocide prevention can provide a foundation for safeguarding populations from mass atrocities. It can also have important implications for peacebuilding and post-conflict reconciliation. In addition to a focus on protecting the lives of vulnerable individuals, efforts must also include the protection of cultural and immovable heritage.

The link between people and culture is an inseparable aspect of a group’s identity. Moreover, the preservation of cultural heritage is a part of a group’s right to exist.

The impact of non-state actors on the destruction of cultural heritage and the trafficking in cultural property can be devastating. These activities are not only detrimental to the physical integrity of cultural items, but they also fuel conflict. Several international legal instruments have been adopted to combat these issues.

The City of San Francisco, recognized around the world as a beacon of hope and innovation, is taking steps to protect the city’s cultural heritage. This community planning effort is aimed at supporting local communities, including ethnic groups and the arts, and promoting long-standing traditions and local businesses.

As part of the effort, the San Francisco Planning Department has released a draft Community Engagement Framework. This framework aims to develop partnerships with other city agencies and community-based organizations. It is based on a recent historic preservation commission resolution.

In addition to providing a framework for engagement, the city has also outlined a number of strategies that it will use. Some of these strategies include improving high-pressure fire protection in the Westside, enhancing housing options for Environmental Justice Communities, and implementing Phase One of the Westside Potable Emergency Firefighting Water System (PEFWS).

As part of its effort to protect the city’s architectural and intangible heritage, the City of San Francisco has created a Legacy Business Program. The program provides incentives to maintain and expand small businesses. These businesses can be certified, and their services can be included in community benefit programs.